Elliott waves are a great tool for binary options traders because they allow deep insights into what drives the market while still keeping things simple.

The Elliott wave theory is a technical analysis tool that can help you understand the movements in long trends and the relationships between different chart periods.

Let’s look at both advantages individually.

During the motive phase, the market moves in the main direction of the trend. It is what pushes the trend forward.

During the corrective phase, the market moves against the main direction of the trend. The Elliott wave theory predicts that motive phase consists of three smaller sub-movements – three movements in trend direction, and two against it between those movements.

According to the Elliott wave theory, a motive phase during an uptrend would look like this:

In an uptrend, the corrective phase would look like this: 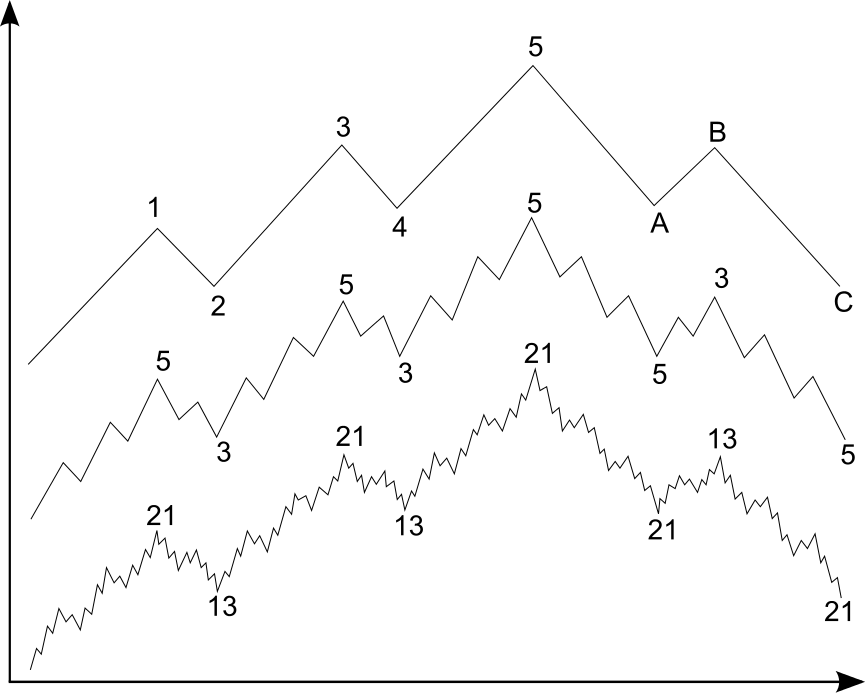 Every movement in an Elliott wave consists of a smaller trend.

These trends follow the same rules as the larger trends. They consist of a motive phase and a corrective phase, which consist of five and three movements, respectively, and each of these movements is made up of smaller trends.

According to the Elliott wave theory, you can start from a daily chart and work your way down to shorter periods. The Elliott waves predict the direction of the shorter periods, when a movement ends, and when a new one starts. To find a trading opportunity for binary options, you have to work until you reach a period of minutes or one minute. Wait until the market has completed a motive phase or a corrective phase and then predict that it will now turn around. You can make this prediction with high/low options, or, especially when a motive phase is about to start, with one touch options or ladder options.

This strategy is based solely on Elliott waves, which is risky.

Most traders either add other indicators to the strategy to find the perfect trading opportunity or add Elliott waves to the current strategy to improve their timing. Either way, Elliott waves are a simple-to-understand tool that can nonetheless allow deep insights into the market.

Elliot waves can often throw up familiar patterns which keen observers have then gone on to specifically name. One important signal is the ‘ending diagonal’. The pattern is formed as a wedge shape when converging waves are annotated with lines. When found towards the end of a strong long term trend, this pattern signals a reversal. The pattern is a very effective indicator, and is popular among elliot wave users.

The Leading diagonal is a similar pattern, found earlier in the wave structure. This however, normally indicates continuation of the longer trend – rather than a reversal as with the ending diagonal.