In this article, you will learn:

With this information, you will immediately be able to start trading simple candlestick formations with binary options.

Candlesticks are a way of displaying market movements. They are an improvement over the line charts that you see on TV and in the newspaper. To understand the purpose of candlesticks, let’s look at why they were developed.

Line charts display and asset’s price movement in a simple line, which has significant downsides. When you look at a chart that displays the price movements of an entire year, for example, a line chart is unable to include a dot for every single price during that year.

When you look at a price chart that is half the size of your hand, you are not seeing the millions of prices for which this asset traded during the year, you see 50 prices, if you are lucky. Maybe the chart selects one price for each week and connects them, or maybe it uses two prices for each week or only one for each month. In any case, you only see a fraction of what was going on.

Even on shorter time frames, you only see part of the picture. The price of most assets changes every second, and no line chart can display this information. Even in a chart that displays the price movements of the last hour, you only see a fraction of what was going on.

When you miss out on a lot of information, you can make bad decisions. To understand why, assume that an asset was in an upwards movement. Now the movement has stalled. During the last period, the price still began to rise, but eventually turned around and entered a fast decline. Now, at the end of the period, it has fallen to roughly the same level as in the beginning.

In a line chart, this period would be displayed as a simple sideways line. It would be indistinguishable from a period during which nothing happened, and the market has moved sideways. Similarly, a period that started with falling prices and ended with a strong upwards movement that took it back to its opening price would look the same, too. This is problematic because the implications of both periods are fundamentally different.

The bottom line is: in a line chart, very different periods can look the same. This vagueness can lead to bad trading decisions, lost trades, and lost money.

Candlesticks solve the vagueness problem by displaying every price of a period in a simple way. A candlestick consists of a thick body and two thin wicks to the top and the bottom.

This simple system tells you everything you need to know about a period. The wicks represent the extremes that the market was unable to hold; the body represents the effective movement of each period. 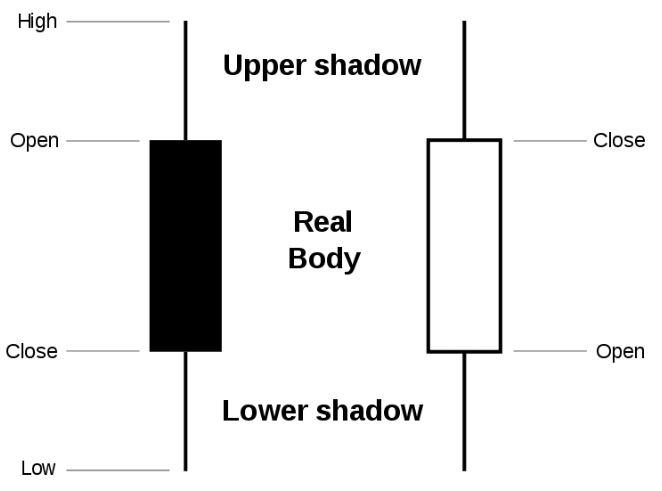 Candlestick charts consist of hundreds of candlesticks, each of which aggregating the market movements of a specific period. 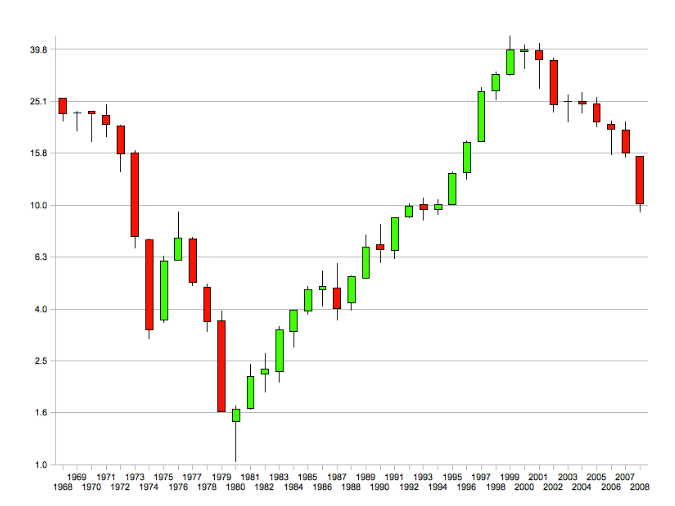 What Are Simple Candlestick Formations?

Think of our earlier example: where a line chart would have shown you the same sideways for all three movements, candlesticks paint a clearer picture:

With these simple conclusions, you know what is happening and what will happen next. Take a look at the picture above, for example. At first, the market was falling. In 1980, we had a candlestick with a long wick to the bottom but an upwards body. Even if you look for nothing else, you can immediately conclude that the market fell significantly but turned around and rose again.

The candlestick in this example is called the hammer. There is also the inverted hammer, which is a sign of downwards momentum.

Here are more simple candlesticks you can use for your trading:

Consequently, the dragonfly doji indicates an upwards momentum and the gravestone doji a downwards momentum, but these indications are weaker than a hammer.

A doji is a candlestick with almost no body but a wick to the top and the bottom. Dojis indicate that the market is currently unsure where it wants to go. Dojis often happen near the end of the trading day, when most traders have stopped trading and volume is low. While a doji is a sign of a slow market, long legged dojis are signs of strong forces in balance. You can expect that one force will soon win over the other, pushing the market strongly in one direction.

There are hundreds, if not thousands of simple candlestick formations – even the smallest variations have their own names. Instead of learning them all by heart, we recommend understanding the system behind them:

Combine these two indications, and you can interpret every single candlestick you see without having to learn any formation by heart. Try to understand the market’s direction and momentum, and you will immediately know what is going on.

Let’s look at these strategies one by one.

How to trade single candlesticks

Single candlesticks allow for short-term predictions. Since they are based on only one candlestick, they only apply for the next one or two candlesticks. A big candle, for example, predicts that the next candlestick will feature rising prices, but after that, it lacks the ability to paint a clear picture.

If you want to trade a single candlestick, you have a few options:

You can focus on a single of these strategies or combine them and pick the one that suits your current market environment.

How to trade the big picture with digital options

Instead of trading single candlesticks, you can also trade the sum of all candlesticks that you see. Typical prices charts have dozens of candlesticks, and their combination can tell you a lot about what is going on.

These three candlesticks create a vivid picture of what is going on: the market fell in the first period, then turned around in the second period, and continued to rise strongly in the third period.

Compare to trading just the big candle alone; this widened scope increases your ability to predict what will happen. You know that there has been a significant shift in market sentiment, making it likely that the new movement will continue for quite some time.

With this knowledge, you gain more investment possibilities. Since you can predict a longer movement than with a big candle alone, you can invest in a high/low option with a longer expiry. You can also use a one touch option with a target price up two times as far from the current market price as the size of the big candle. If your broker offers ladder options, you might even find a profitable opportunity to get a very high payout.

Of course, you can also combine this strategy with trading single candlesticks. The key is always to be honest about what you know.

Combine candlesticks with other indicators

Candlesticks can be a great way of finding the right way for trading other indicators. When you are trading trends, swings, or technical indicators, you often know that the market will change direction soon, but you might be unsure when. Candlesticks can be the tool to get your timing right.

When you expect than an upwards movement will soon weaken and turn around, for example, you can monitor the market for an inverted hammer. As soon as you find it, you invest in falling prices. In this way, you maximize your chances of winning a high/low option and even open the door to the possibility of trading a one touch option.

Use Candlestick Charts At These Leading Brokers: